Victors Rather Than Victims

One of the most powerful moments at our Awaken event last week was the panel discussion hosted by Goodie Goodloe from our team at Mosaic and featuring Yvonne Latty. All of the African American panelists pointed towards the importance valuing the uniqueness of the individual and seeking to love and reach out to the outsider. At the same time, a prevailing theme seemed to be the power of redemption in the African American story in our nation.

I just happened to read an article a couple of days ago which seemed to be addressing the same theme. The title of the article:

‘Not the descendants of victims but victors’. The article tells the story of David A. Wilson, a 28 year old African American journalist who tracks down a man related to the family which enslaved his ancestors. The man’s name is David Wilson. David A. Wilson’s journey was captured on film as part of a documentary called Meeting David Wilson. Tonight, I watched this film. 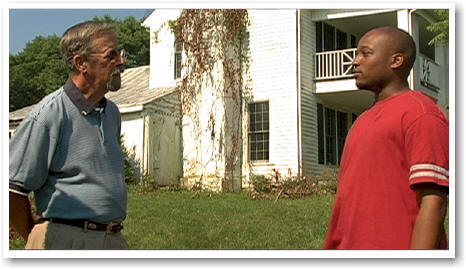 This powerful story reminded me of the power of faith, the resilience of those who were enslaved as well as their descendents, the contribution of those who were enslaved to help create the world’s wealthiest nation, and the beauty of reconciliation. This dark time in our nation’s history is not glossed over as the two David Wilsons discuss reparations, the hypocrisy of Christians owning slaves, and what conversations they would have if they were able to travel back in time to talk with their ancestors who lived just three generations ago under very different circumstances.

One of the most powerful scenes for me was when the two David Wilsons have a family reunion with both of their families. It was beautiful! I couldn’t help but smile when I noticed the children from both families were breaking open a pinata. 🙂

I was reminded that stereotypes exist because friendships do not.

[Check out your level of prejudice here and read part one (of four) of an article on creating a diverse community].

A real poignant moment came as the two men sat on the porch and talked about their feelings and their hopes. After the scene ended a quote from Dr. Martin Luther King, Jr. came across the screen which read:

Creating a Diverse Community – Part TwoDiversity
Why Homophobia is So GayDiversity, Mosaic, Outreach