Not that we needed more proof that our world continues to become more and more diverse, but here is an interesting fact.  Mohammad is now Britains most popular baby name for boys.  Richard Allen Greene from CNN writes:

“Last year’s most popular name for baby boys in England has been knocked off — by Mohammed. 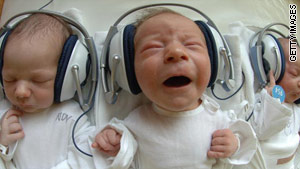 That’s not immediately obvious from data put out this week by the Office of National Statistics, which declared Wednesday that Oliver was the single most popular name for boys born in 2009.

But a CNN analysis of the top 4,500 boys names shows that, when different spellings of the name are lumped together, Mohammed is No. 1.

The United Kingdom is about 4.6 percent Muslim, with just under 2.9 million Muslims according to the Pew Forum on Religion & Public Life.

And Muslims have a strong tendency to name their sons Mohammed….

The Muslim population has risen rapidly in Western Europe in the past 20 years, according to the Pew Forum on Religion & Public Life.

Read the rest of the article here.

How can your church, non-profit, or company engaging our diverse world more effectively?

“Behind the Scenes” InterviewDiversity, Featured Articles, Outreach
A Sneak Peek inside Not Like MeDiversity, Outreach