Recently, Not Like Me was mentioned in a post at The Sci-Fi Christian: Theology at Warp Speed.

“Have you been watching Disney’s Phineas & Ferb? If not shame on you, because it’s awesome! In this cartoon, yes cartoons are often the most thought provoking media, two brothers plan to do something new every day of summer vacation. These are boys who will not waste time. Well, except for the day they pledged to do nothing but sit under a tree.

So where do you start? For us geeks it has to be “Nerds of a Feather.” In this episode the boys strap on the costumes of their favorite genre characters, Phineas as a space captain and Ferb as an elf, and head off to the Tri-State Area Annual Sci-Fi and Fantasy Convention. There they find something shocking, the convention is divided into two opposing fan bases, the “Speckies” support their beloved Space Adventure while the “Finkies” support the fantasy Stumbleberry Finkbat franchise. The two sides are so divided that none of them visit special effects legend Clive Addision who worked in both franchises.

As I watched events unfold it hit me, Phineas and Ferb provide great examples of behaving like Jesus by reaching out to people who are not like them. In fact they are great examples of Eric Bryant’s Not Like Me. In this book, Bryant argues that Christians should reach out to the outcasts in society, those who are the most unlike us if we wish truly behave like Jesus. Jesus did not spend his time with the religious establishment but those outside of it.

So how do the boys reach out to nerds not like themselves and attempt to preempt an inter-genre geek war?”

Check out the rest of the article here.

Not Like Me Message at Gateway in AustinGateway Austin, Outreach 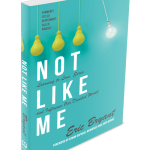