Outliers: The Story of Success by Malcolm Gladwell (re-post) 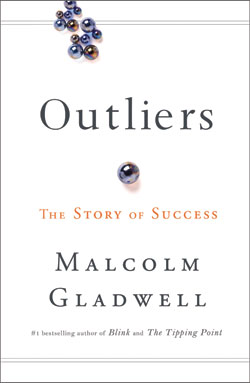 Part of our desire at Mosaic was to become a community that helps people become successful – to become the person God created them to be – in a faster amount of time than they would have been able to make it on their own.

I was intrigued by the idea that a person’s birth month could actually help determine whether or not they will have a shot at becoming a professional hockey player.  It was fascinating to discover that Bill Gates spent 10,000 hours programming before dropping out of college and starting Microsoft or that the Beatles became expert rock musicians after performing for over 10,000 hours in Germany before coming to the United States.

What can we do to help people become more successful sooner?

Here are some of  my favorite quotes from the book:

“No one- not rock stars, not professional athletes, not software’s billionaires, and not even geniuses- ever makes it alone.”

“Success arises out of the steady accumulation of advantages: when and where you are born, what your parents did for a living, and what the circumstances of your upbringing were all make a significant difference in how well you do in the world.”

“The traditions and attitudes we inherit from our forebears can play the same role.”

“Each of us has his or her own distinct personality. But overlaid on top of that are tendencies and assumptions and reflexes handed down to us by the history of the community we grew up in, and those differences are extraordinarily specific.”

“When we understand how much culture and history and the world outside of the individual matter to professional success…. We have a way to make successes out of the unsuccessful.”

“If Canada had a second hockey league for those children born in the last half of the year, it would today have twice as many adult hockey stars.”

“Superstar lawyers and math whizzes and software entrepreneurs appear at first blush to lie outside ordinary experience. But they don’t. They are products of history and community, of opportunity and legacy. Their success is not exceptional or mysterious. It is grounded in a web of advantages and inheritances, some deserved, some not, some earned, some just plain lucky- but all critical to making them who they are. The outlier, in the end, is not an outlier at all.”

To receive the full notes and to sign up for my monthly email newsletter, send an email to me at eric@ericbryant.org with “Outliers” in the subject heading.

Ray Allen of the Boston Celtics suggests that all NBA players are Outliers (not just the superstars).  For more of his thoughts on this book as applied to the NBA go to J.A. Adande’s article “Theory in Practice.”

One of my friends has pointed out that there is still something about Bill Gates that motivated him to go to all of the effort to program when others with the same opportunities did not.  In other words, some people still struggle to succeed when given the best environment to do so.

What insights did you draw from the book?