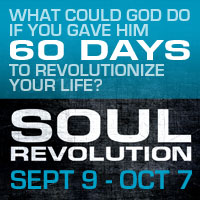 We continued the Soul Revolution series at Gateway Church in Austin. One of our founding pastors Ted Beasley shared about hearing God’s voice at the McNeil campus, and I spoke at the South Campus. Here are some of the ideas:

“The goal of the 60:60 experience is to stay connected to God throughout the day and see our lives absolutely transformed in ways we’ve only dreamed about.

God is searching like a detective unearthing the facts, discerning the clues. He’s like an all-seeing satellite in high earth orbit surveying all 7.04 billion of us. What is he so intent on? What’s he trying to find?

For the eyes of the Lord range throughout the earth to strengthen those whose hearts are fully committed to him. (2 Chronicles 16:9)

God is always looking for someone who is fully committed. All-in. Someone who will throw caution to the wind. A woman of action. A man of dedication. To what? To strengthen their heart. To give them life.

Unfortunately, it is all too rare to find someone who actually gets stuff done. At work, employees do the least amount required. Politicians make empty promises. In church, we intend to change, but we don’t execute or follow through.

This Soul Revolution experiment is designed to move you from good intentions to authentic willingness to real action.

Once Jesus issued an invitation to his best friends in the world which is the same invitation we are getting in this series. Just be with me. Stay connected to me. And there in Matthew 26, do you know what happens to his close friends? They fall asleep. Jesus says, “Watch and pray so that you will not fall into temptation. The spirit is willing, but the flesh is weak.” Matthew 26:41.

We desire deeply to grow spiritually, but the flesh is weak. Commitment erodes. Resolve dissipates. Follow through freezes up. We struggle because of what the Apostle Paul calls “The Flesh.” It’s that residual part of our pre-Christian lives that still hangs on inside of us as long as we are this side of heaven. “For the flesh desires what is contrary to the Spirit, and the Spirit what is contrary to the flesh.” – Galatians 5:17

In the Bible, Joshua overcomes the resistance of the flesh and makes things happen. Joshua’s name means “God is salvation.” The Almighty God brings salvation to this world through men and woman who are obediently respond to his voice. Not because of his skill as a leader but because of his radical obedience to the Lord, Joshua becomes the greatest pioneer in all of Scripture. God had to constantly remind Joshua to be “strong and courageous” to help him battle the flesh. Appearing 14 times in the book of Joshua is the phrase “The Lord has given you the land.” It’s a done deal. You can have courage to act on my orders, on my promptings, because my purposes will be accomplished. The stuff I ask you to do may not always turn out the way you envisioned, but it you are obedient, I’ll do something really good, really significant through you.

When God gives you something to do, it’s already done. From his side of the table, it’s taken care of. If you are obedient, you will succeed. Now, when you respond to God’s promptings, it may not always go the way you planned. God said he gave the Israelites their homeland, but they had to wander around in the desert for 40 years first. The Lord has given you the land. You are more than conquerors.

People ask me all the time what it means to be a mature Christian. Is it a number of years you’ve been in the church? Is it the extent of your biblical knowledge? No, it’s faith. Maturity is measured in terms of your willingness to hear and respond to God’s leading.

Some of us have been in church pews from the time we were in diapers. Some us know that the OT book of Habakkuk comes between Nahum and Zephaniah, but we don’t live by faith. We haven’t attempted something outside of our comfort zone or responded to a prompting from God in ages. In fact it’s been so long, we don’t even recognize the voice of God when we hear it anymore, but He is speaking. When you hear His voice, don’t let the moment pass. Listen and respond.

Joshua led the people of Israel to defeat the mighty city of Jericho. The Lord God has promised a new homeland to the Israelites, but they have to go in and take it. They have to conquer the warlike, child-sacrificing tribes of Canaan. Jericho was a military fortress built to defend the eastern approach to the high country. So Joshua moves his army near the walled city of Jericho, the most heavily fortified city in the ancient world at that time.

Then the Lord said to Joshua, “See, I have delivered Jericho into your hands, along with its king and its fighting men. Joshua 6:2.

God gives Joshua an unusual plan – march around the city once with all the armed men for six days. On the seventh day, march around the city seven times with the priests blowing the trumpets. When you hear them sound a long blast on the trumpets, have the whole army give a loud shout; then the wall of the city will collapse and the army will go up, everyone straight in.” Joshua 6:3-5.

When the trumpets sounded, the army shouted, and at the sound of the trumpet, when the men gave a loud shout, the wall collapsed; so everyone charged straight in, and they took the city.

Where God guides, God provides. But there is this Flesh thing that happens in the transaction. This other little voice in us that stops us in our tracks too often. More than likely, the Israelites and even Joshua had to have faced doubts on one of the laps, yet they kept going.

Listening and responding to God. It’s the rhythm of faith. It’s how you stay connected. God’s always talking, giving you little missions, but there is this resistance. Sometimes in being fully obedient to God, you have to fight the Flesh. You have to do seven laps. Here are seven laps you may have to do, seven resistance tactics of the Flesh you may have to overcome to really live a life of faith.

Lap #1: Am I hearing God’s voice? Not sure if you are hearing God’s voice? Scripture says to err on the side of believing it’s from God if it meets the standard of God’s test. Paul says in 1 Thessalonians 5:19-22, Do not quench the Spirit. Do not treat prophecies with contempt but test them all; hold on to what is good, reject every kind of evil.

Test the prompting. Is it consistent with Scripture? Will it require me to step out in faith? Will I have to trust him for the results? If the answer to those three is “Yes,” then you should follow through.

Lap #2: I do the big (religious) things, I don’t sweat the small stuff. This is the lap that all churchy people must do before God really blesses them with amazing results. They figure if they go to church and know the Bible and avoid heinous sins like murder, they’re good with God, but the one thing Jesus tells us not to neglect is the daily small stuff: I am the vine; you are the branches. If you remain in me and I in you, you will bear much fruit; apart from me you can do nothing. (John 15:5)

Lap #3: I’m a hypocrite, an imposter. I can’t do what God has asked me to because of the sin in my life. Who am I to be his instrument after all I’ve done? This is the card that your Flesh loves to play on you. God has called some you to important work, but you’re ignoring him because you think you’re disqualified. Paul starts listing out sins in 1 Corinthians 6, sins that many of us have done, and carry scars with us to this day, but then Paul makes one of the most incredible statements in all of Scripture: “And that is what some of you were. But you were washed, you were sanctified, you were justified in the name of the Lord Jesus Christ and by the Spirit of our God.” 1 Cor. 6:11

God doesn’t look at you and see your sin. He doesn’t think you’re an imposter. You were washed, you were set apart. And any thought that somehow your past disqualifies you from hearing and responding to his word, that’s a lie meant to stop you from living a fully connected life.

Lap #4  I’ll look like a fool. Sometimes God will prompt you to do something that may seem outlandish at first blush. As you have more and more exposure to listening and responding to God, he’s going to speak to you in dramatic way, and sometimes, you may feel like a fool, but he has his purposes in it.

Lap #5: What if I fail? If God asks you to be obedient, then the outcomes are his department. Willingness – that’s your task.

Lap #6: What if God fails me? What if I respond to a prompting and nothing good happens? It’s not faith unless you have to trust him. It’s not a real relationship unless you are willing to bet it all on him. You can’t judge God’s blessing or failure based on what happens immediately after you obey. Philippians 2 says that Jesus was obedient in going to the miserable experience of the cross, and it was not until later that God exalted him, that all of the suffering was rewarded. God will not fail you in your obedience.

Lap #7. What if God asks for more? What if I start listening and responding, and everything changes? What if he wants me to give up my job or my lifestyle or my boyfriend? What if he wants me to move Haiti and live in a tin house and be a missionary? Will he just keep asking for more until I am spent? The answer to that is no. He doesn’t want to rob you of joy or destroy who you are. Will he keep raising the stakes of faith? The answer to that is yes. Every time God gives you a mission, he will correspondingly give you enough faith to follow through. This is the sacred dance of faith. God prompts you. You respond in willingness. He increases your faith, and then he works miracles.

God’s eyes range throughout the world, and they fall upon you. Does he see a man or woman who wants to be all his? As you listen to the words of this next song, do something listening. How is he asking you to respond?”

To watch or listen to the entire message, go to www.gatewaychurch.com/podcast.