The #1 Thing I Learned From Exodus: Gods and Kings 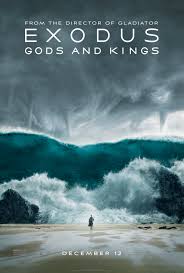 Ridley Scott knows how to make a stunning and epic film.

The actors involved all know how to transform themselves into a new character. (Joel Edgerton who played Tom Buchanan in the Great Gatsby was unrecognizable as Ramses!)

The Alamo Drafthouse knows how to make a delicious Fried Egg BLT with loaded french fries.

Those facts were not new to me.

The #1 thing I learned from the film Exodus: Gods and Kings was this:

A personal relationship with God is foolishness to the world.

This film really reminded me of Paul’s 1st chapter in his 1st letter to the Corinthians.

The fact that God was portrayed as an angry and vindictive little boy should not surprise Christ-followers. (One reviewer used the word “petulant”). The filmmaker, writers, and actors were all trying to make sense of a story that does not make sense to a skeptical world.

Some of what we read in the Scriptures can seem confusing or overwhelming (even to believers), especially since we are looking at moments in history several thousands of years removed for our lives.

In addition, it is hard for us as humans to understand God’s holiness and our place in the cosmic order. Plus, the Creator of the Universe remains mysterious. His ways are not our ways, and we can only see this side of eternity, and our view is quite blurry.

When reading the story of Exodus in the Bible or watching the movie, a few questions may emerge:

To make sense of this story, it is important to realize that the story of Moses and the Exodus reveals to us God’s power over the following:

1. Exodus shows us what the Day of Judgment looks like, and it is not fun to watch.

Deep inside we know that injustices need to be made right, but when we see the firstborn sons of Egypt die we cannot help but feel for those affected.

It’s important to remember the following:

Sure we may not be responsible for a long list of atrocities like the Pharaoh (who had called for the killing of all firstborn children born to the Hebrews) or Hitler or Stalin or Mao Tse Tung or any other despot, but we all have our issues. We’ve all hurt others. We’ve all had evil thoughts. We’ve all done things we regret. Judgment is not a fun topic. Judgment is not our job. It is far beyond our pay grade.

As Timothy Keller has said: “When we say ‘I can’t believe in a God who would __’, we’re saying we don’t really want a God beyond our comprehension.”

Each of the plagues revealed the God of Israel’s power over the gods created by the people of Egypt.

As awful as these plagues were, I get the sense that God is protecting us far more often than we realize. There are other times in the Scriptures when the angel who destroys is stopped by God (2 Samuel 24:16; Isaiah 37:36).

Consider God’s character and concern for all peoples in these other passages:

2 Peter 3:8-9
But do not forget this one thing, dear friends: With the Lord a day is like a thousand years, and a thousand years are like a day. The Lord is not slow in keeping his promise, as some understand slowness. Instead he is patient with you, not wanting anyone to perish, but everyone to come to repentance.

Ezekiel 18:23
“Do I take any pleasure in the death of the wicked?” declares the Sovereign Lord. “Rather, am I not pleased when they turn from their ways and live?”

1 Timothy 2:1-6
I urge, then, first of all, that petitions, prayers, intercession and thanksgiving be made for all people – for kings and all those in authority, that we may live peaceful and quiet lives in all godliness and holiness.  This is good, and pleases God our Savior, who wants all people to be saved and to come to a knowledge of the truth. For there is one God and one mediator between God and mankind, the man Christ Jesus, who gave himself as a ransom for all people.

3. The Creator of the Universe can do the miraculous!

In the film, Ridley Scott had an interesting take on the plagues. He removed the back and forth conversations between Moses and Pharaoh and explained the way that the plagues could have happened in a more natural way. Filmmakers need to make choices to condense the story and to explain what happens in a way that makes sense to them and the filmgoer.

Even still, in the film, the parting of the Red Sea was stunning to behold!

Here’s what is really remarkable:

4. The Passover foretold the sacrifice God would make on our behalf.

The sacrifice of the lamb and then placing the blood over the doorpost became known as Passover, the day the Hebrews’ firstborn sons were rescued.

When Jesus walked among us, a prophet called John the Baptist let all who saw Jesus know that Jesus was “the lamb of God who came to take away the sin of the world.”

A few years later, Jesus died during the Passover celebration as the ultimate Lamb sacrificed for the sins of the world. All who want to be rescued and forgiven will be because of what God did on our behalf.

I hope those involved in this film and those who see this film are inspired to discover the real story behind one of the greatest rescues in history – an entire nation rescued from slavery and freed from a corrupt and evil system.

An even more amazing truth I have discovered:

The Creator of the Universe loves each one of us, pursues each one us,

and invites each one of us into a personal relationship with Him.

As Paul said in the Marketplace in Athens:

“God… gives everyone life and breath and everything else. From one man he made all the nations, that they should inhabit the whole earth; and he marked out their appointed times in history and the boundaries of their lands. God did this so that they would seek him and perhaps reach out for him and find him, though he is not far from any one of us. ‘For in him we live and move and have our being.’ As some of your own poets have said, ‘We are his offspring.’” – Acts 17:24-28

If we have eyes to see God at work, we will be amazed at what He has been doing to reveal Himself to us!

For more resources, consider the following: