The War to End All Wars? (WWI)

On the this Memorial Day, it is important to pause to remember those who gave their lives protecting our freedom.

Over the past few months I have been diving deep into learning more about World War I and World War II. Like most Americans, I have great grandfathers, grandfathers, and great uncles who were involved in these two conflicts. I wish my interest in knowing more had come sooner in my life so that I could have asked them to share about their experiences. Unfortunately, these generations did not like to talk about their experiences (at least my family members did not).

Whether through watching documentaries on television, listening to podcasts like Dan Carlin’s Hardcore History, or reading books like No Ordinary Time by Doris Kearns Goodwin, discovering more of what was overcome in these international conflicts has become a genuine interest.

We can learn much from the heroism, the barbarism, the tactical brilliance, and the strategic mistakes. Total Casualties include those who were killed, missing in action, and wounded in WWI – 37 million

A Brief History of WWI

Eventually, most of Europe, Japan, and eventually the United States fought against the Central Powers of Austria, Germany, Bulgaria, and Turkey.

Tragically, the 19th Century tactics of war met the realities of 20th Century weaponry resulting in stalemates along the Eastern and Western fronts.

Some battalions went into battle with bayonets and lances while on horseback wearing white fuzzy hats. They were obviously no match for machine guns and later gas attacks.

What a horrible way to discover the need to adjust tactics to new technology.

From what I understand the Germans attempted to defeat France on the Western front so they could then turn their attention to Russian on the Eastern front. By rushing into France through Belgium, the British were compelled to get involved.

Eventually, when the Russians gave up the Eastern front due to their own internal chaos and the Bolshevik revolution, Germany was able to mobilize all their troops to the Western front. Some think they were on the verge of winning the war, but they had decided to use their new submarines to bomb ships bringing over munitions from the United States to England which meant American civilians were dying.

After more and more American civilians died, the United States finally entered WWI. They entered the war just when Germany seemed on the verge of victory.

Some suggest that the USA had made so much money by providing weapons and supplies to the Allies that the USA could not afford to see the Allies lose the war – especially once the Allies could no longer purchase supplies with cash but actually went into tremendous debt to the Americans. The USA realized the need to get involved to help the Allies win so they could be repaid.

The Results of WWI

The technological advancements took war to a more destructive level than ever before.

Germans introduced submarines, gas attacks, and the Paris Gun which could send shells 75 miles while the British introduced tanks.

The Russian monarchy was killed by the Communists who came to power some say as the result in part because of the disillusionment of the brutality of WWI.

The Ottoman and Austria-Hungarian Empires came to an end. Future conflicts in the Balkans and the Middle East can be traced back to the fall of these empires.

The young German Empire came to an end as part of the punitive Treaty of Versailles. As a result, nationalism and fascism became prominent in Germany leading to the rise of the Nazi party and World War II.

As American leadership saw China become a communist nation, they ascribed to the Domino Theory which led to the US involvement in the Korean and Vietnam wars hoping to stop the spread of communism.

Colonialism and Monarchies shifted dramatically from the 1800s to the 1900s.

In the end, “The War to End All Wars” may have actually been a catalyst to a century of wars.

On this Memorial Day, may we remain grateful to those who served in such tumultuous times.

Europe Before and After WWI 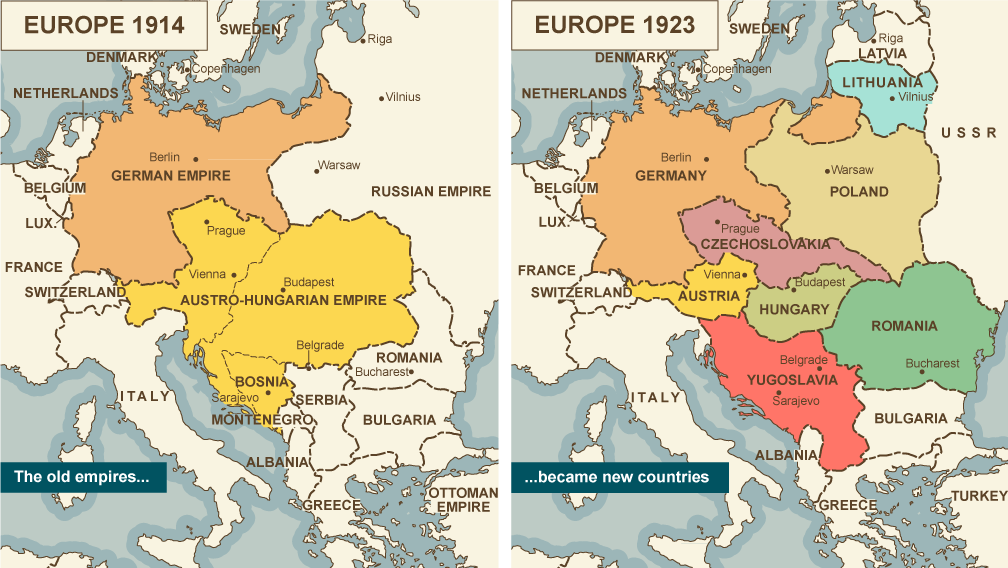