Seeing the sites in the Holy Land means seeing a lot of church buildings. It makes sense in many ways. The early church expected Jesus to return at any minute, and they were under a great deal of persecution. Building a building to remember or even protect these important sites probably would not have crossed their minds or have been possible.

Emperor Constantine ended the persecution against those who followed Jesus in AD 313.

The Passion of Jesus

The Bible is incredibly broad in the beginning and the end and incredibly specific in one place – the passion of Jesus. In fact, we have four accounts of that one week in the life of Jesus with details almost hour by hour.

“Passion” has been defined by Webster’s dictionary as
“the sufferings and crucifixion of Jesus Christ.”

The Passion is the week before Jesus’ death and resurrection.

Jesus demonstrates that passion leads us towards a willingness to sacrifice.

So what was Jesus’ passion?

And let us run with perseverance the race marked out for us,  fixing our eyes on Jesus, the pioneer and perfecter of faith. For the joy set before him he endured the cross, scorning its shame, and sat down at the right hand of the throne of God.

Throughout his ministry, Jesus knew his destiny was to die as the sacrifice for all humanity – shedding his blood for the forgiveness of sin. Jesus set his sights on The Temple in Jerusalem so that we could be “made holy through the sacrifice of the body of Jesus Christ once for all.” – Hebrews 10:10

For centuries, Jerusalem has been the site of conflict with different faiths claiming it as their own. Even now, the Old City is divided into the Jewish Quarter, the Armenian Quarter, the Christian Quarter, and the Muslim Quarter.

Jesus lived during a small time in history just before the Jewish Temple was destroyed in AD 70.

All that remains is a part of the retaining wall for the Temple now referred to as the Western Wall.

Standing on the Temple Mount are the Al Aqsa Mosque and the Dome of the Rock. The Wall around Jerusalem was built in AD 1535 on top of the ruins of the location for most of the original wall.

“Not My Will Be Done But Yours”

When visiting Jerusalem, I was struck with how close everything is to everything else. Bethany where Jesus brought Lazarus back to life was on the East side of the hill from he Mount of Olives where Jesus taught his disciples to pray. The Mount of Olives includes Jewish cemetery that was being used by families in the times of Jesus and is just across the valley from the Old City of Jerusalem. The Garden of Gethsemane is further down the hill from the Mount of Olives. This is where Jesus asked the disciples to stay up to pray with him, but they could not stay awake. Golden Gate of the Jerusalem Wall from the Garden of Gethsemane

Then the man brought me back to the outer gate of the sanctuary, the one facing east, and it was shut. The LORD said to me, “This gate is to remain shut. It must not be opened; no one may enter through it. It is to remain shut because the LORD, the God of Israel, has entered through it. The prince himself is the only one who may sit inside the gateway to eat in the presence of the LORD. He is to enter by way of the portico of the gateway and go out the same way.” – Ezekiel 44:1-3

With the Temple and this Gate in view, Jesus prayed while dropping sweats of blood:

The Sacrifice and Rebirth of Our Hero

The story of Jesus resonates so deeply within Western Culture especially that we have trouble remembering how remarkable his story truly is.

So many great works of literature over the centuries include the hero who sacrifices himself or herself only to be reborn.

In his book, The Great Good Thing: A Secular Jew Comes to Faith in Christ

, author and screenwriter Andrew Klavan shares how he began reading the New Testament as a teenager because so many novels and important works of literature referenced or were inspired by the story of Jesus he felt he needed to know the origin of these stories.

Even Neo from the Matrix, Harry Potter, Iron Man, Wonder Woman and so many other pop culture stories include the hero’s journey that seems to end with sacrifice but includes a twist of rebirth.

The Cross and Tomb

The greatest miracle of all time – Jesus’ death and resurrection. Faith for those who follow Jesus all hinge on this moment.
Jesus was not starting a new philosophy or a new religion but he became the Way for humanity to reconnect to God.

Even still, people from all over the world come to kiss the stone on which Jesus’ cross stood 2000 years ago. The Shrine Over Calvary in the Church of the Resurrection

In the fall of 2016, researchers were granted access to the site of the tomb. This was the first time the tomb had been accessible since 1555! The team had 60 hours to do their work. They were pleased to find the original limestone still intact with a cross marking the site of the tomb thought to be where Jesus was buried. The Shrine Over the Tomb in the Church of the Resurrection

A more contemplative and beautiful place to consider was unearthed in 1867. Called the Garden Tomb, a hill resembling a skull (“Golgotha”) and an empty tomb were found in what fits the description of a garden owned by a wealthy man – matching the description of Joseph of Arimethea.

The Garden Tomb is a great example of what it could have looked like, but it is not usually on most tours because they require their own tour guides. There is no entry fee, and it is worth the effort to add to your itinerary. “Golgotha” means Place of the Skull (pic from 100 years ago) A relationship with God requires faith. Even with all of the evidence, at some point we have to choose to die to whatever we are holding onto that keeps us from fully surrender.

In our life, there is no resurrection without first experiencing the crucifixion.

Applying this to our life:

“I have been crucified with Christ and I no longer live,
but Christ lives in me.
The life I now live in the body, I live by faith in the Son of God,
who loved me and gave himself for me.” – Galatians 2:20

Those early followers of Jesus gave up everything to tell the world that what they witnessed is true. Their message has passed from one generation to the next so that even those who have not seen Jesus know Him, follow Him, and willingly go wherever He leads them. 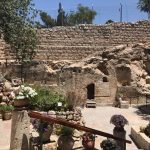