In the midst of the familiar, we miss the extraordinary!

The Story of Christmas is God came to us!

This is mind-blowing! God revealed Himself as a person, and he began this journey as a baby! He could have come riding on a white horse! He could have overthrown the Roman Empire. Instead, the King of Kings emptied himself to be a baby and ultimately took on evil, sin, and death by willingly dying on the cross and won by rising from the dead.

In the midst of the familiar, don’t miss the extraordinary.

I understand it is confusing. How can there be one God – if there is a Father, a Son, and a Spirit?

The Creator of the universe – three persons in one?

Some have even struggled to have follow Jesus because they have a hard time understanding how He can be both God and human. To help us understand who He is, the Scriptures use words like Father and Son and Spirit, but sometimes that just adds more confusion.

But think about it for a moment: it makes sense that God would be beyond description.

“God, however, lives without the limitations of a three-dimensional universe. He is spirit. And he is infinitely more complex than we are. That is why Jesus the Son can be different from the Father. And, yet the same. The Bible clearly speaks of: God the Son, God the Father, and God the Holy Spirit. But emphasizes that there is only ONE God. If we were to use math, it would not be, 1+1+1=3. It would be 1x1x1=1. God is a triune God.” – author unknown

In order to understand the nature of the Triune God consider the following analogies:

Their relationship and how they work in unity yet they are One:

Ultimately, we have to ask ourselves, do we really want to know God even if we do not fully understand Him? Are we willing to step out in faith even in the midst of uncertainty and mystery?

The Baby Jesus vs. The King

We like baby Jesus because He doesn’t interrupt our plans. Babies are cute – especially if they aren’t ours.

The baby Jesus grew up to become the King of King who sacrifices on our behalf. He took on evil, sin, and death and won by rising from the dead.

The eyewitnesses who witnessed the life of Jesus describe Him as far more than a baby in the manger. Several examples include Philippians 2, John 1, Hebrews 1 among many others.

Jesus was more than a great teacher, a healer, a Rabbi, or even a martyr.

Consider this description of Jesus:

“For he has rescued us from the dominion of darkness and brought us into the kingdom of the Son he loves, in whom we have redemption, the forgiveness of sins. The Son is the image of the invisible God, the firstborn over all creation. For in him all things were created: things in heaven and on earth, visible and invisible, whether thrones or powers or rulers or authorities; all things have been created through him and for him. He is before all things, and in him all things hold together. And he is the head of the body, the church; he is the beginning and the firstborn from among the dead, so that in everything he might have the supremacy. For God was pleased to have all his fullness dwell in him, and through him to reconcile to himself all things, whether things on earth or things in heaven, by making peace through his blood, shed on the cross. Once you were alienated from God and were enemies in your minds because of your evil behavior. But now he has reconciled you by Christ’s physical body through death to present you holy in his sight, without blemish and free from accusation—” – Colossians 1:13-22 NIV

Jesus is the Creator!

Jesus is God made visible!

Jesus is the first to be reborn as a new creation!

Jesus reconciles us with God!

“The true nature of God is a relationship. The expression of Jesus to humanity is the extension of that relationship.” – Joe Slawter

“In a world so devoid of grace, the concept of Emmanuel – “God with us” is foreign. We are creatures who turned against our Creator. Yet, we were furiously pursued by a God who took on our flesh and walked among us, sympathizing with our pain and dying for our sin.” – Andrew Voigt

One final illustration to help us comes from A Severe Mercy, by Sheldon Vanauken.

God is writing a story, and we are in it. All of us have the image of God and the Spirit of God is actively pursuing us to restore us, forgive us, and heal us.

He wrote Himself into the story. That’s Jesus.

God is the author of creation. He wrote himself into the story as Jesus. His Spirit influences his characters (us).

For more on this including an audio message, check out the following: 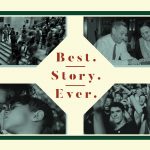