We continued our new series at Gateway Church in Austin called Love Everyone: Life by Life!

God’s greatest commandments were to love God with all our heart and to love our neighbors as we love ourselves. That kind of selfless love for others is a love that engages—one that meets others where they are and is intentional. But what might loving our neighbors, co-workers, and friends in this way really look like day-to-day?

As you make efforts to intentionally love your neighbors, coworkers, people around you—the payoff is you will eventually experience loving community back. You’ll grow spiritually, experiencing God working in and through you. But it does take intentionality.

We’re looking at how Jesus intentionally loved people, and if you look at his life, he was no social recluse, monk-type—Jesus Engaged people. He ate meals and did things with people the religious shunned.. That’s the easiest way to engage:

Matthew, also known as Levi, was a tax collector in Galilee.

10 While Jesus was having dinner at Matthew’s house, many tax collectors and sinners came and ate with him and his disciples. 11 When the Pharisees saw this, they asked his disciples, “Why does your teacher eat with tax collectors and sinners?”12 On hearing this, Jesus said, “It is not the healthy who need a doctor, but the sick. 13 But go and learn what this means: ‘I desire mercy, not sacrifice.’ For I have not come to call the righteous, but sinners.” Matthew 9:10-13

The religious of Jesus’ day believed that the way of the righteous was to stay in the holy huddle, disconnect from those sinner people out there, and if you did hang out with those people—there’s something wrong with your spiritual condition (ever been to one of those churches?).

Jesus responds, “It’s not the healthy who need a doctor, but the sick.”

And this is an important point if we’re going to be like Jesus.

In fact, this is such a big deal—I want to speak to Mature or maturing Christ followers for a second. Because I have been a part of churches including Gateway that were effective at reaching people like Matthew’s friends, I will sometimes hear:

Our church is “less mature” than churches with people who’ve been walking with Jesus for a long time.

This is a lie, but it works to keep people from truly maturing in Christ-likeness.

Last week, we looked at Jesus with the Woman at the Well in Samaria—he cares for her, listens and engages her in dialogue, pointing out her deeper spiritual need—she comes to faith and tells all her friends who also come to faith.

The disciples came back and say, “Here Rabbi, we brought you food.”

Look at his reply:

But Jesus replied, “I have a kind of food you know nothing about.” 33 “Did someone bring him food while we were gone?” the disciples asked each other.34 Then Jesus explained: “My nourishment comes from doing the will of God, who sent me, and from finishing his work. 35 You know the saying, ‘Four months between planting and harvest.’ But I say, wake up and look around. The fields are already ripe for harvest. 36 The harvesters are paid good wages, and the fruit they harvest is people brought to eternal life. John 4:32-36

Jesus would know food for the spiritually mature—right!?

He said mature food is doing the work of God like I just did, caring for those who are alone, hurting, 5 times divorced and living with a guy, tax collectors, partiers, people who don’t fit the religious country club—“I desire mercy, not sacrifice.”

You won’t really know until you Care enough to Pray, then Listen deeply to their story, and Engaging with them in meaningful ways will help you do that.

Jesus engaged with people.  He would Eat with people like at this Matthew Party.

You could do the same—Eating a meal is a really easy way to engage.  Simply having someone over for dinner or a BBQ, or going out to lunch with a coworker or friend. There’s something about sharing a meal together—it bonds, and it opens up conversation in new ways.

Or throw a Matthew Party—invite all your neighbors or coworkers over for dinner or a BBQ, or get creative.

When was the last time you had a neighbor over for a meal?

Ummm—harder than we thought to do Ordinary love—because Love has to engage in more meaningful ways.

I’ll confess–It’s hard to do—we have so much going on.  And often we let it be too big a deal—feels like things won’t be nice enough, or it requires so much, so we don’t do it. That’s why we need this—we need a faith community to remind us—stories like these to challenge us, an App to keep it on our minds. Because Hospitality is a way of loving people.

The world is coming to Austin. John Burke recently met with an Austin Demographer and some other pastors—he told us Austin is now a Gateway City—like New York and San Francisco—it’s a city that the best and brightest from India, Africa, Europe, China, South America—they’re coming here to work in high tech.

But it doesn’t just have to be a meal—you can find lots of other ways to engage.

Go to Their Events

When there are neighborhood events, work parties, places people gather—to so that you can engage with people.

The next day there was a wedding celebration in the village of Cana in Galilee. Jesus’ mother was there, 2 and Jesus and his disciples were also invited to the celebration. 3 The wine supply ran out during the festivities, so Jesus’ mother told him, “They have no more wine.”4 …6 Standing nearby were six stone water jars, used for Jewish ceremonial washing. Each could hold twenty to thirty gallons. 7 Jesus told the servants, “Fill the jars with water.” When the jars had been filled, 8 he said, “Now dip some out, and take it to the master of ceremonies.” So the servants followed his instructions. 9 When the master of ceremonies tasted the water that was now wine, not knowing where it had come from (though, of course, the servants knew), he called the bridegroom over. 10 “A host always serves the best wine first,” he said. “Then, when everyone has had a lot to drink, he brings out the less expensive wine. But you have kept the best until now!” John 2:1-10

So here’s what we take from this.

First, Jesus was accused of being a drunkard and friend of sinners because he engaged with them—but Jesus never got drunk. And told in his word, “Don’t be drunk with wine, because that will ruin your life. Instead, be filled with the Holy Spirit….” Ephesians 5:18

Yet Jesus brings enough wine to the party that people could abuse it. Which means—God’s main goal is not to control our moral decisions, but to be among us showing us the path to life—to guide our freedom to learn to enjoy all his good gifts with moderation under His Spirit’s guidance.

For some, addictive tendencies means moderation is not going to work for you. And as friends, we should limit our freedoms if it would cause another to stumble.

But let God’s Spirit guide you going into morally challenging situations—don’t let their behavior dictate or corrupt yours, but also don’t push people away because they don’t know God’s ways or follow them. They’ll never know if you don’t engage with them and model a better way.

If we’re going to follow Jesus, we need to Engage the outcast, the marginalized, the one’s at work who get left out or gossiped about at the water cooler. Or the people who are not so easy to love.

That’s often where God’s most at work—in the people the world doesn’t easily love.

One time it says Jesus was just passing through Jericho—so he’s not intending to stop. But as the crowds flock into the streets because they’ve heard about this miracle worker who might be the Messiah.

[Zacchaeus] tried to get a look at Jesus, but he was too short to see over the crowd. 4 So he ran ahead and climbed a sycamore-fig tree…. Luke 19:3-4

Jesus notices him, says Zacchaeus, come down [which is an important reminder, you may end up with 20 people you’re praying for (maybe 1-2 per day), but you can’t engage all equally. That’s okay, God will show you when there’s openness, and linger there.

Jesus does this—“I’m going to stay at your house tonight, Zacchaeus.”

That’s one way to engage—invite yourself to spend the night. Zacchaeus is excited, but it says the whole town erupts:

6 [Zacchaeus] hurried and came down and received [Jesus] gladly. 7 When they saw it, they all began to grumble, saying, “He has gone to be the guest of a man who is a sinner.” Luke 19:6-7

Zacchaeus was a notorious little gangster with a Napolean-complex the size of Jerusalem–no one liked him.

Yet Jesus realizes, there’s something else going on under all that—and no one is too far for the saving arm of God. After that day with Jesus, Zacchaeus promises to pay back anyone he’s robbed 4 times,

Jesus says: “Today salvation has come to this house…For the Son of Man has come to seek and to save that which was lost.” Luke 19:9-10

Imagine  If all of us who have downloaded our app “Join In” to love our 20 neighbors and coworkers over the next few years?! It’s a long-term effort and we need reminders and ongoing encouragement.

We could demonstrate the love of God to 100,000 people over the next few years—if you are faithful with the 20 people around you. Imagine what a unifying difference we could make in such divided times! 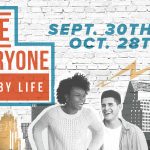